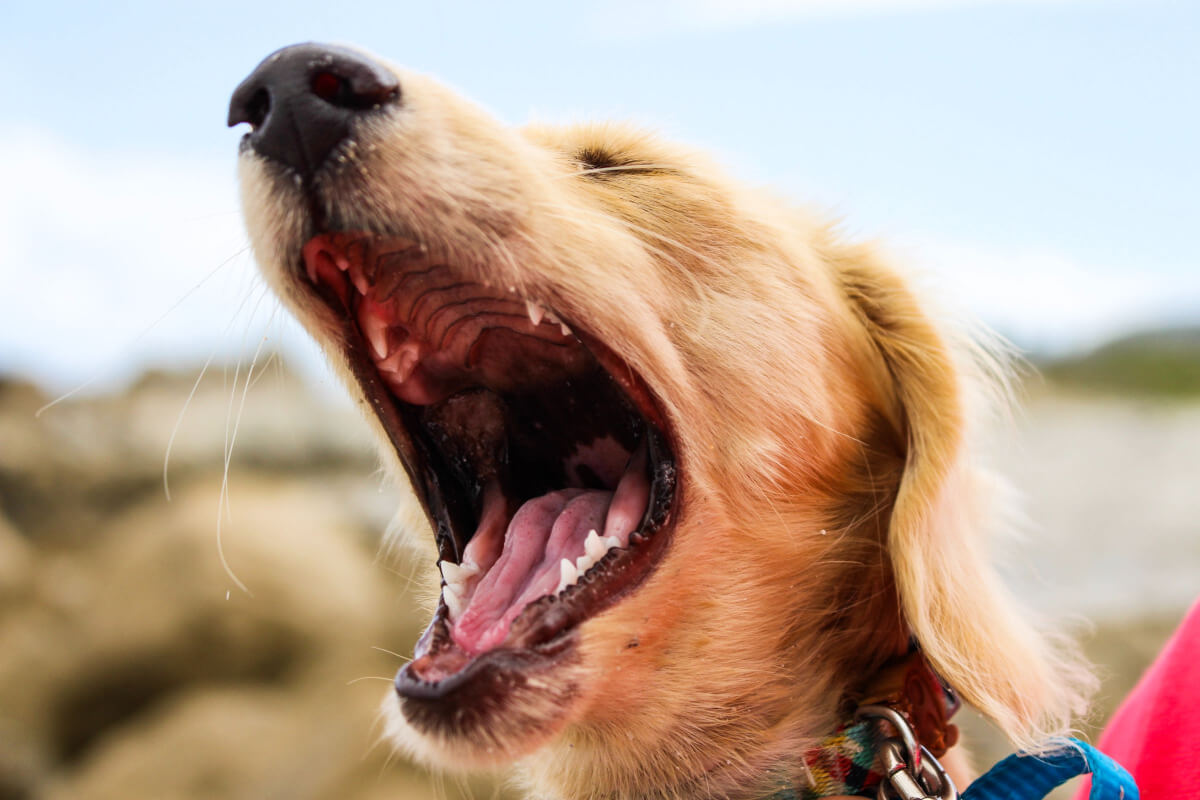 Aggression in dogs is undoubtedly one of the most challenging issues that all dog owners are facing and learning how to stop a dog from being aggressive is certainly a necessity.

Aggressive behavior (such as barking, biting or spring attack) can often be a serious threat to people (even owners) or to animals.

Learning what is causing their aggressiveness will certainly help in treating this behavior issue.

This is article, we would be covering:

If you are observant enough, you would be able to see your dog exhibiting certain signs of aggressiveness through his body languages. These indicators serve as a preempt warning to you that he is feeling uncomfortable and is frustrated and needs HELP!

If you are able to “attend” to him in a timely manner, this can greatly reduce the likelihood of him springing his “attack”.

Aggressiveness “Alarm” From Your Dog

Watch out for the following aggressiveness “alarm” from your dog:

You would also see some behavior changes in your dog’s reaction to his routine activities as described below:

Your dog starts to show tension for his unpleasant state when he is in a crowd environment such as his favorite playground. He exhibited “fighting” behavior rather than enjoying the fun.

Showing warning signs of agitation.This can be seen when he gets annoyed very easily and starts barking at other animals who attempt to “join” him for a play.

Timid dogs start to show change in behavior, getting reactive and snap at pets who approach them. They get over reacting to things in their environment and in some instances, going towards other dogs and bark at them or attempting to chase them.

Your dog starts to exhibit overly pushy behaviors and bully timid or smaller size dogs, and he appears to enjoy such action.

There are various categories for canine aggression behavior and can be largely classified by their motivation for the aggressiveness, the interrelated conditions that lead to their aggressiveness and the intended target (person, object, place) of aggression.

Look out for the types of aggression that your dog is suffering from and work on the right treatment for him.

Often known as Resource Guarding or Food Aggression. This is a condition where your dog will show signs of aggressiveness such as barking and even biting when someone attempts to take away their valuable resources such as food, toys, beds or any of his personal stuff.

This is often the result of a situation when your dog is held back from doing things that he desires or excited to do and is forced to do something that he hates doing. (Such as being forced into a crate, held back by a dog leash, or being restricted in a confined fenced yard). This leads to his frustration, and he might direct his anger at anyone close to him.

This is the case where dog’s aggression is directed to an intended target. The canine gets aroused because of some stimulus (eg. he sees a stranger outside his window) and is prevented from directing his aggressiveness towards the stimuli (people). As he is unable to reach his target of hostility, he may attack and bite anyone in his proximity.

Your dog is worried about his own safety or even your safety and acts aggressively. Depending on how he perceived  a threat to be, it could be a real or imagined threat. Imaginary threat could be a situation where your friend could be innocently reaching out to take a hold of his leash, and he may view that as an intention to do him harm, which causes him to initiate an attack.

Genetically predisposed to aggression due to genetics . Certain breeds tend to be more aggressive in nature and will need more obedience training to make them behave themselves.

Also known Protective Aggression, this is a reaction from your dog when he feels that his personal space is invaded. He will initiate an attack to safeguard or defend his assets.

Typically, happen in hunting breeds as they are by nature, train to prey and hunt for their food. You will see him chasing smaller dogs or cats and may pose danger to children. For example, your kid could be having a simple chasing game with him, and he may out of sudden, strike an attack

Your dog is attempting to protect himself when he feels the pain and is trying his best to prevent further pain. Usually, he will attack animals or people coming near to him rather than on the thing which is causing his actual pain. This is why many dog lovers get bit when attempting to treat an injured dog.

As the name implies, your dog reacts aggressively in social situations, and he doesn’t like the company of other dogs. He is naturally scary in behavior. This is often due to the lack of proper socialization.

What Is Causing Your Dog’s Aggression?

Following are some of the possible factors that lead to your dog’s aggressive behavior.

Your Dog Reaching His Adolescence Age

Just like your lovely little kid, when he reaches his adolescence age, things get a bit challenging for you. He starts to get rebellious and at times, would disobey your instruction.

The same goes for your dog as well. When he grows from a young puppy to adolescence, there is inevitably a change in his personality as his body starts to flood with hormones and his brain is “rewired” during puberty.

Pay special attention to him during this period as he might be suffering from general anxiety as a result of the changes in his hormones.

Lack Of Socialization For Your Dog

Socialization plays a vital role in ensuring that your dog will be able to interact and get along well with other animals, people, places and activities. A dog who is never given a chance to socialize will feel isolated and fearful and would be nervous and anxious when he sees a large crowd.

If you find your dog behaving aggressively out of the blue or gradually over time, this could be a warning sign that he is suffering from some health issue (illness or Injury). Dogs aren’t unable to “tell” us their pain, and they could only exhibit their frustration through his body language which is acting aggressively. Some common health related issue for aggressive behavior could be:

Make an arraignment with your vet to have a medical checkup for your dog before the health conditions get worse.

Fear For His Safety

Your dog might exhibit his fear and anxiety when facing new environments, people, animals,  things or even strange or sudden noises.

One of the common aggressiveness that I see from my Yorkshire Terrier is whenever there is a storm coming, he would be acting very aggressively. I have to think of a way to calm him down!

Ultimately, I got him a thundershirt and supplement the scary sounds with music, this works extremely well in making him stay calm and relaxed during a storm.

He Wants To Be The Leader Of The Pack

This is when your dog attempts to show you his dominance and challenges you for the “control”. Dogs are by nature submissive but there are some breeds who are born to hunt, and they are more of an aggressive type.

This is when you need to show him that you are the pack leader and make him submissive. This can be done through ways such as setting your house rules, boundaries and limitations.

He is being restrained from his freedom. He could be confined to a constraint area (eg, in a crate) or on a dog collar that restricts his movement.

How To Stop Dog Aggression?

If your dog has not been properly trained to socialize, you should start on this training program right now. A well socialized dog will behave well in all situations and will not exhibit any undesirable behaviors, including aggressiveness.

How Much Socialization Does A Dog Need Daily?

As a guideline, your dog should have a minimum of 2 hours of interaction time with other pets and people per day. You do not have to make it a full 2 hours session. You can divide that to maybe 4 sessions, with each session lasting for about 30 mins at various different locations.

This will work very well as dog usually have short attention span and keep each session short will help him to stay focus and with different training ground for each session, this will offer him  a variety of different exposure to smell and touch as well (apart from people and pets)

For a start, go for an area which is not too crowded, and not too stressful for him. A quiet dog park will be an ideal choice and maybe put him on a dog leash (just in case he gets out of control). If possible, get him a well socialized adult dog as a mate to teach him the appropriate behaviors. (Did you have any friend’s dog that could do this role?)

Remember, don’t be harsh to him if he shows signs of discomfort.Take it slowly and gradually expose him to a more crowded area as he feels more confident.

How Do You Tell If Your Dog Is Well Socialized?

When your dog is able to interact well and comfortably with a variety of people (different gender and ages), other breeds of dogs and especially with cats, he is considered well socialized.

This works by rewarding your dog with his favorite treats when he has relaxed and calm down. This will reinforce his thinking that “good” things will happen when he remains calm and will reiterate this behavior.

This reward based training is often known as positive reinforcement whereby your dog will get a reward when he repeats the desired behaviors or actions or corrects his unacceptable behaviors.

Rewards can come in various varieties such as food treats, toys, games, praise or petting. Of course, most dog owners had feedback that food treats work the best as no dog will dislike food, right?

When your dog is experiencing some health related issue, he will exhibit some undesirable behaviors just to “tell” you that he needs your attention and help.

Medical problems such as age related diseases, dementia, ear infection, any foreign object sticking in his mouth or brain damage can possibly lead to his sudden behavior changes. Seek help from your vet as soon as possible for an early treatment.

This is certainly a “No – No”. Any form of physical punishment or even yelling at him will cause backfires and possibly escalate your dog’s aggression and start attacking you as his form of defense.

When your dog is growling at you, he is telling  you that he is uncomfortable. If you hit him, he will attack and bite you. You should find out what is causing his discomfort and eliminate the cause.

At times, you have to rely on some medication to ease your dog’s aggressiveness before he can be trained. If he is under persistent fear or stress, he would not be in a good shape to learn or be trained. Many will only need temporary medical help. Talk to your vet, he will be able to advise you.

With this knowledge, you are now in a better position to tackle your dog’s aggressiveness and get him back to be his usual shelf ( A Lovely Submissive Dog!)